The Circus is Coming

The Circus is Coming

Terrified that they are about to be sent to an orphanage after the death of their foolishly snobbish Aunt Possit, Peter and Santa set off on a journey in search of an uncle who they have heard travels with a circus. He turns out to be a clown in Cob's Circus which they track down to Bridlington in the north of England. From the moment they arrive in this new and exciting circus world, kindly Uncle Gus looks after them and his caravan becomes their unusual home. 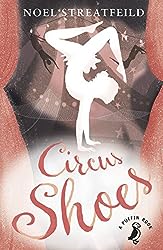 
The Circus Is Coming is a children's novel by Noel Streatfeild, about the working life of a travelling circus. It was first published in 1938 with illustrations by Steven Spurrier. For this novel, Streatfeild was awarded the annual Carnegie Medal from the Library Association, recognising the year's outstanding children's book by a British subject. American editions and some later British editions are titled Circus Shoes.