Synopsis: Only Tim was pleased when he learned that he had been left a stately house in Sussex by an old lady. Here, he thought, was the ideal place for his father, badly hurt in a car crash, to make a complete recovery. Caldicott Place was an enormous, rambling mansion, sadly neglected by its previous owner and miles too big for the Johnstones. In order to help the family finances Mrs. Johnstone took in for the holidays three rich children who had nowhere else to go. The three Johnstone children found it difficult to share their home with the others who had had little experience of a real home. And behind all the family upsets was the nagging worry that Mr. Johnstone might never get better. In her own inimitable way Noel Streatfeild has told here a moving story of Tim's absolute faith in his father's recovery, set beside the novelty of living in an enormous mansion instead of a suburban villa, and sharing it with three other children, whose backgrounds are completely different from his own and his brother's and sister's 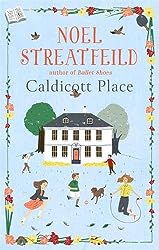